Tonikaku Kawaii is an anime television series inspired by Kenjiro Hata's manga of the same name. It was first announced on March 4, 2020 and is produced by Seven Arcs. The series premiered on October 2, 2020 on Tokyo MX. Crunchyroll is streaming the anime series under the name TONIKAWA: Over The Moon For You.

Its first season ran for 12 episodes from October to December 2020. An English dub premiered on November 20, 2020. In late 2021, it was announced that the series will have a second season and that it will premiere sometime in July 2022.

Serialized in Shogakukan's Weekly Shōnen Sunday, Tonikaku Kawaii follows a protagonist whose name is written with the characters for "Hoshizora" ("Starry Sky" in Japanese), but whose name is pronounced as "Nasa". On the day of his high school entrance exams, Nasa encounters a beautiful girl named Tsukasa. For Nasa, it feels like destiny is finally calling out to him that he will have a girlfriend, but things take a turn for the worse when Nasa is hit by a truck. source: Crunchyroll 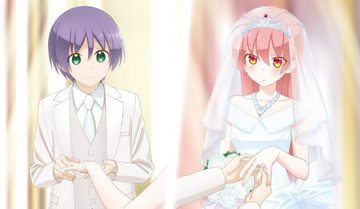 The series was produced by Seven Arcs and directed by Hiroshi Ikehata, with Kazuho Hyodo writing the scripts, Masakatsu Sasaki designing the characters, and Endō composing the music.