She is one of Chitose's maids. She quickly changes her personality from being simple-minded and innocent to going berserk with a giant sword in her hands. However, she is always happy with a big smile on her face. She will probably do everything Chitose tells her to do without hesitation.

She always wears her maid outfit while at work and has very long wavy hair.

When Chitose kidnaps Nasa and decides to get in the way of his marriage, she proposes to her maids to ruin his relationship with a sex scandal. Charlotte (her innocent maid, but maybe not so innocent) takes her new (lewd?) errand way too seriously and starts stripping. Fortunately, Chitose's confidence starts to crumble and she stops Charlotte. And when she asks her why she hasn't hesitated a bit, she candidly responded: "But he is super cute". 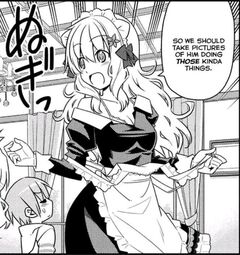 What follows is a confusing chat between the two maids and Chitose regarding how Charlotte should be more reluctant with lewd things. All this fuss makes Nasa capable to escape to the nearest room. But when Charlotte realizes that, she breaks in holding a giant sword trying to stop him. Though, she damages a lot of precious stuff without concluding anything.

During the honeymoon arc, she always helps Chitose with her plans to interrupt Nasa and Tsukasa's relationship, but she always nicely points out how cute Tsukasa and Nasa are together.