Enishi originally taught in a big Tokyo university but then he moved to Nara where he is living with his wife right now. He is an archaeologist.

Enishi is quite tall with short hair.

He is usually seen wearing a yukata while at home.

When Nasa Yuzaki and Tsukasa Tsukuyomi finally get to his house in Nara, he is very nervous at finally meeting them. Indeed he has never seen Tsukasa before and is so agitated that he hasn't moved an inch from a corner of the house since the morning. After some awkward silence, Enishi asks Nasa if he'd like to go take a bath, but Nasa is wary about leaving Tsukasa alone with his parents so soon. She tells him it's fine if they want to talk to her, so he leaves still sounding a bit unsure. After Nasa leaves the room, Enishi suddenly prostrates himself before Tsukasa thanking her saving Nasa's life. 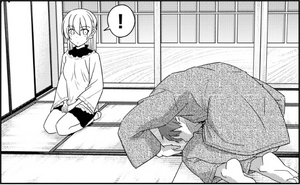 He continues by saying how proud he and Kanoka are for raising such a good son despite their own faults and if he decided to marry the person who saved his life, they have nothing else to give besides happy tidings and best of luck. Enishi finishes off by asking that she take care of Nasa from now on.