"She's a really good girl. She's been helping manage the bathhouse for a long time now"~~Nasa

Kaname Arisugawa (有栖川要 , Arisugawa Kaname) is one of the residents of the bathhouse that Nasa frequents.

She has a very outgoing personality. She's been helping the bathhouse for a long time. Despite being young, she is very mature and always gives good suggestions to Nasa to help him out with his couple life. Like her mom, she really likes dirty jokes and apparently, she has no fear of cleaning the males' bath while Nasa is in there. She isn't shy and prefers a direct approach.

She has shoulder-length light hair tied up with two ribbons and blue eyes. Generally in school uniform; wearing bathhouse apron while working and taking it off before going to school.

When Tsukasa and Nasa arrive at the bathhouse for the first time as a couple, Kaname is already working and is completely shocked that Nasa has brought a girl with him. Indeed, she thought that he had no interest in them. And once Nasa tells her that they are already married, she gets astonished even more.

After congratulating them, Kaname invites Tsukasa in to take a bath as an excuse to talk alone with Nasa. In effect, she demands an explanation for what is going on. Because in her (queer) mind there were no possibilities for Nasa to get a girlfriend and she also dreams about him reaching 30-something years and be like "I'm finally a magical girl" and she will be like "yes, you are a magical girl". However, now that he is married, all these bizarre thoughts had been shattered. Delayed by some playful banter, in Kaname's mind comes out a little detail about his wife. For sure Tsukasa is beautiful, but she is also young. "Yeah, I think she said she was 16" Nasa peacefully said. Yeah, peacefully, except for Kaname who doesn't hesitate for a second to call him a lolicon.

Kaname then asks if he's told Aya about it but, he says that he hasn't and that makes our little teenager sigh and lose hope in Nasa (Indeed Aya, her sister, has a crush on him). But something else is bothering her right now: "when is the ceremony?" ...I didn't really think about that. "the rings?"...We aren't Christians, so...do we really need rings and stuff? "did you propose?" ...Oh right...I might have to do that.
Nasa's ditzy answers truly hit and knock out her calmness. She now thinks he is lacking devotion for his wife and so, she turns into "I will give you advice"-mode. She suddenly becomes more mature and starts giving the first of many future suggestions to Nasa and that really helps Nasa's determination. Yeah, but she is not always so mature, she has a queer lewd side that pops out very soon when she enters the room where Nasa was taking a bath. Without any clear reason besides messing around and having fun with him, she stayed in the doorway and starts smiling and peeking. She really likes peeking ^^. 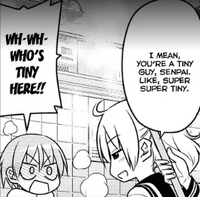 She picked on him so much that in the end, the poor guy exits the bath exhausted and without any force.

When Nasa's apartment completely burns down, Nasa and Tsukasa have nowhere to go and Kaname kindly offers to Nasa and his wife to stay at the Arisugawa Bathhouse until they find a new place. And obviously, knowing Kaname, the offer can't be asked in a normal way and is asked while he was taking a bath and was quite turned on (he was thinking of Tsukasa).

Kaname thinks that hosting Nasa and Tsukasa at the bathhouse is a nice way to thank Nasa for everything he has done for that place. But now, she is in a pickle, she lent them a spare room but what about her sister Aya? Indeed, from now on, she will meet every day the couple, who are living in the same place and will soon realize that Nasa is now married and yeah, this happens way sooner than expected. In the great disappointment of Aya who liked Nasa for years, Kaname, switching to her mature side, finds the correct words to help her.

[16]-"Oh god! My senpai is getting more and more gross by the minute...!!"~~Kaname talking about Nasa
[20]-"If I got married and my husband says"small places are good enough", I'll literally burn the house down and force him to move"
[33]-"Once a husband stops helping his wife stay cute, the girl will change from a cute wife into your average roommate buddy!! And do you want that!? Senpai!!"

The owner of the land and building of the bathhouse is actually Kaname-chan, so she manages more than 50 per cent of the business.