..
She is Nasa's ex-teacher from middle school.

She is a teacher from the middle school that Nasa had frequented. She is always super busy with work and doesn't have much time for her life. However, once she sees how happy Nasa's marriage is, she becomes more open to future relationships. She considers herself a boring person.

She has short straight hair and always wears eyeglasses.

The same day that Tsukasa and Nasa decide to go to Maihama land, an amusement park, Yanagi-sensei had been invited by another teacher, Taniguchi-sensei, to go there. Even though she is definitely on a date, she is basically ignoring it. She thinks he can't consider her as a possible girlfriend because she is too boring. Taniguchi-sensei somehow won a pair of tickets at a lottery and invited her out and so, she thinks it's just a casual meeting. But, would someone who obtained tickets by sheer coincidence really invite someone of the opposite gender out if they don't care about that person? Indeed, during the day, "something" starts happening between the two and once they are in a horror attraction, she finds the courage to ask him to hold her hand.

The day continues happily and the evening doesn't last long to arrive and with it, a confession?! 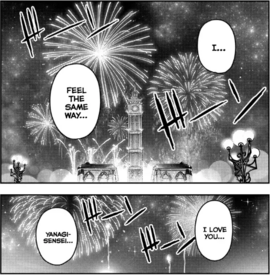