"She is small and cute"~~Nasa (without context)

She is a 16-year-old girl attending Otogi all-girls high school and she is the class representative.

She has short wavy hair and mostly wears the school uniform.

Shirogane's heart has been taken away by a gruff guy and she is in desperate need of advice. She has chosen Nasa as a romantic counsellor but the poor guy needs advice himself to understand how romantic advice works and so, he asks Tsukasa. According to Tsukasa, love is always a war of the minds and a contest to see who wins and who loses. And what do you need in order to win? Intel gathering aka stalking.

The next day a teacher and his student are actively looking for this rude guy. Luckily, the stalkers win aka they find the guy before getting caught. 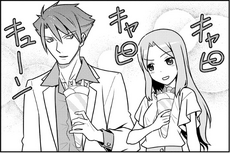 Yes, the gruff guy who took Shirogane's heart is Ginga and our stalkers are both surprised as one realizes that the guy is his cousin and the other one sees him with some sweet company even though it's just mere coincidence. Shirogane really likes Ginga and seeing him with Aya is such a big shock that she can only run away.

Obviously, it is a misunderstanding and luckily Nasa knows it and clears everything out to Shirogane even though some tears have already fallen. But now, she has come to the realization that she really likes him and so, Nasa has only one advice for her: "Why don't you just go tell him yourself!". Nasa has convinced her, the resolution is up, nothing can stop her now, there is only one little particular known as the right occasion although it doesn't take long to arrive. Indeed, Ginga has finally found his stalker (he was being stalked by a real stalker) and traps him in a dark narrow space and that is the perfect spot for a confession. 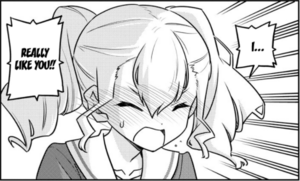 Conclusion? She confesses her love. The reply? Quite enigmatic: