She was the minister of education, but she resigned a few days after Nasa and Tsukasa married. As for why she says she is worried about her health and she may no longer be involved in politics due to her age. She had great influence and power. Indeed, she easily tracks down Tsukasa's location while she was still living in Nasa's apartment.

Born around 1937. As a little girl at the end of world war 2, she was taken in by Tsukasa. Tsukasa eventually told her about who she was. Tokiko promised to make her wish come true. Ultimately when the United States went to the moon during the 60s, Tokiko ended up retrieving a moon rock for Tsukasa somehow to comfort her. Tokiko later became minister of education later in life.

When Nasa and Tsukasa went to a hot spring resort, she appeared in front of Nasa acting like she was lost because the resort was too big. When Nasa takes her back to her own room, Tsukasa appears and reveals her identity as her grandaunt. Apparently, she is there just to mess around and make acquaintances with Nasa. Tokiko was wondering what kind of guy her "little ice queen" ended up falling in love with. And so, after a quite relaxed conversation, she leaves them alone with a nice pearl for Nasa:

Tokiko has invited Nasa, Tsukasa and everyone else to a trip to the mountains aka camping in a wide area bought ages ago by Tokiko just so she could gaze up at the stars until she became bored and turned it into a camping grounds. It's evening up in the mountain, the moon is high in the sky and everyone is enjoying a plentiful barbecue in a peaceful atmosphere. But, there is always a "but" and in this case, it heats up the air. Indeed, Tokiko and Kaname have organized something for our couple:

A giant display pops up from nowhere. What does this mean? Tokiko-san really wanted to have a wedding reception and so, Kaname has organized one with the help of Nakiri. Yeah, but what kind of thing could a person like Kaname ever do? An embarrassing video! Wait, not soo embarrassing, just a regular (embarrassing) video featuring Nasa and Tsukasa in different situations while Nakiri's voice revives their love story. 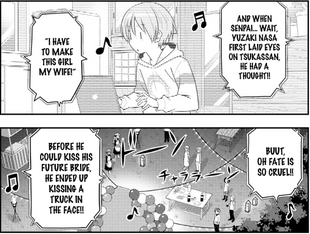 Once the wedding reception is finished and everyone is enjoying the fireworks that Tsukasa brought, Tokiko proposes that Nasa talk alone with her and not about weird things as Tsukasa thinks. The chitchat is not so serious, but still earnest. The main argument is Nasa's marriage and it doesn't take too long for Tokiko to understand that Nasa is truly a clever boy and has realized more things about Tsukasa than she thought.

Tokiko passed away soon after.